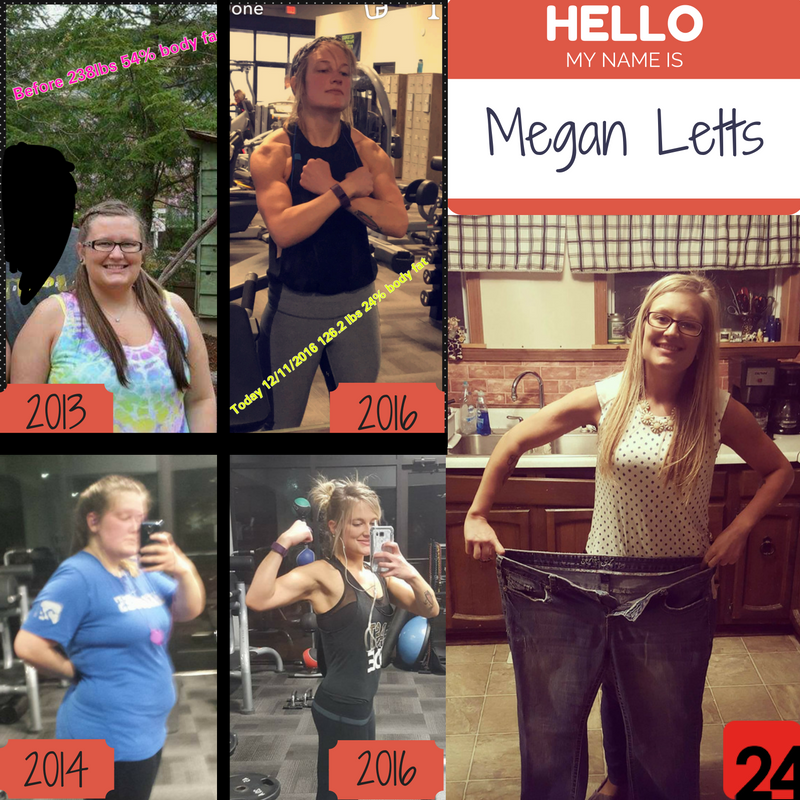 “I started my fitness journey back in 2013, I weighed 238 lbs. I decided it was time to get control of my weight, so some of my friends and I decided to join 24.

In the first year, I wasn’t very disciplined and had only lost 20 lbs while my friend was down about 70 lbs. I became very discouraged. I used to hide food in my room, and would snack behind everyones back because I was so ashamed of myself.

My breaking point was in 2014 when I was in so much pain with my back, due to being diagnosed with degenerative disc disease. I was in the May 22, 2011 Joplin tornado. I sought shelter in the cooler of the grocery store where I worked. I got trapped and crushed under debris. The doctor said that I would not be able to have surgery because it would be one of the hardest things I would have to go through. He said that I needed to lose weight and strengthen my core. So, I thought okay, and I decided to go ahead and try to start again. I had a tendency to give up too easily but decided that I was no longer going to stop and start and that I had to change my life. I just did my own thing, and was not eating very much ( about 600 calories a day, plus cardio) so I struggled, but I never quit!! One day I looked down at my legs, and started to notice the my leg muscles looked smaller but I just assumed that due to hardly any food and over working out, that my body started to eat my muscle. I realized I had lost weight but not in the right way. So I decided to go to Complete Nutrition, and a very nice girl, helped me with a meal plan, and so I started to do low carb and meal prep. I was still doing cardio though.

Fast forward to 2015, I had lost over 50lbs and so at about 160lbs I decided to start lifting weights. I loved it. I started noticing lots of gains in muscle and body strength and I felt extremely empowered to become a strong female. I was still doing some cardio, but mostly lifted weights. As of today, I have lost 119lbs! I started at 238lbs, 54% body fat, and now I stay between 122-125lbs with 24% body fat. I still have loose skin because that will happen when you lose so much, but when I think back to where I was in the beginning and all that pain that I was in, to now, where I rarely have any pain, I am reminded that I am grateful for all my flaws and scars. I earned them! I just want to let any person know, especially females, not to be scared to lift weights. Don’t be afraid to go in there with the guys. Everyone at 24, whether it be gym goers or the employees, they are always willing to help you with learning about different lifts. I have now moved away, and it is bittersweet for me. That gym was more like my home than anything. My goal now is just to keep balance in my life as far as food is concerned. I still enjoy unhealthy foods on the weekends, but keep it pretty clean on the week days. I would like to continue to tone up my lower half and continue to build my core. But the main focus is happiness and not to stress out on the small stuff. Together we will get there one day at a time!! Don’t give up, you’re worth it! Thank you 24!!!”